GOLFING IN THE KINGDOM – Thailand’s nearly 300 top-of-the-line golf courses and its reputation as a fun and friendly destination have made the Kingdom the world’s third largest destination for golfers.

There are many countries in the world with great golf courses, but none that offer the overall golf experience of the Kingdom of Thailand. Thailand’s 280-plus golf courses and its reputation as a fun, friendly, safe and cost-effective destination have made the Kingdom the world’s third largest golf tourism destination – behind Spain and the United States and ahead even of Great Britain, the home of golf.

More than 700,000 foreign golfers – about half from within Asia itself – come to tee off in Thailand each year. With world-class courses and facilities in all major tourism centres, it’s not hard to find great golf and unforgettable experiences, which not surprisingly, result in the highest return visitor rate of any other golf destination worldwide. 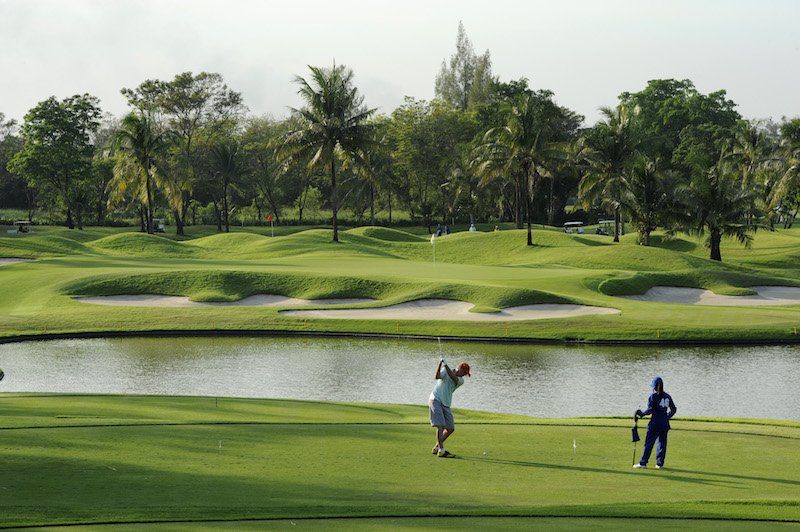 Thai Country Club
Owned by the Peninsula Hotel group, Thai Country Club offers a five-star experience. Every detail is covered, from the immaculate clubhouse to customer service and, as you would expect, the course itself. The Club has hosted six Asian Tour events and recorded winners including former US Masters champions Tiger Woods and Vijay Singh.

There are many standout holes on this wonderful course, with the quad of par-3s – all adjacent to water – offering as interesting and testing short holes as you’ll find anywhere. Before or after your game, be sure to spend some time sampling the clubhouse buffet, by far the best at any club in Thailand.
www.thaicountryclub.com 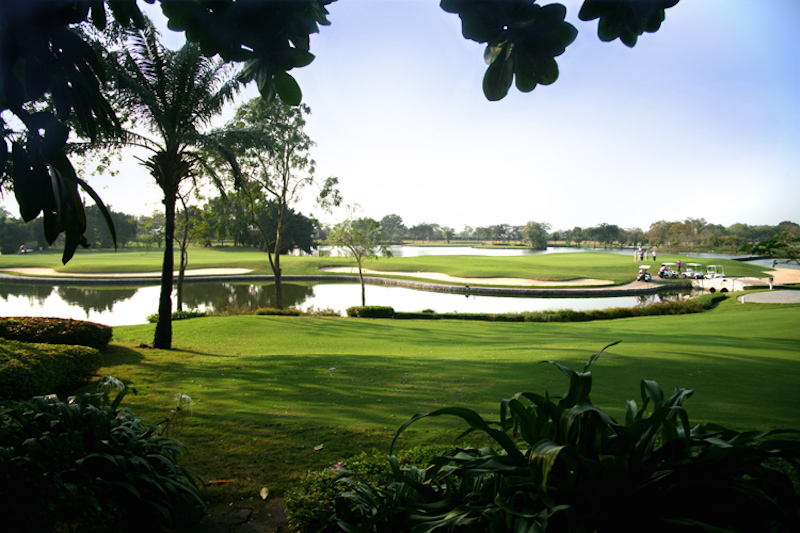 One of the most unique courses in Asia, the five-year-old Dream Arena layout is a replica course that mimics the great holes of the British Isles and United States. The front nine contain copies of such revered holes as the ‘Postage Stamp’ hole at Troon and the road hole at St Andrews in Scotland and the Blue Monster at Doral and island hole at TPC Sawgrass in Florida.

Holes 10 to 18 are a full replica of the back nine at Augusta National, home of the US Masters, all with the similar yardages and appearance to the famed Georgia course. While the vegetation and environment is clearly different to the venues on which Royal Gems City’s holes have been modelled, they are remarkably similar to the originals and provide a great talking point during and after your game.
www.royalgemsgolfcity.com 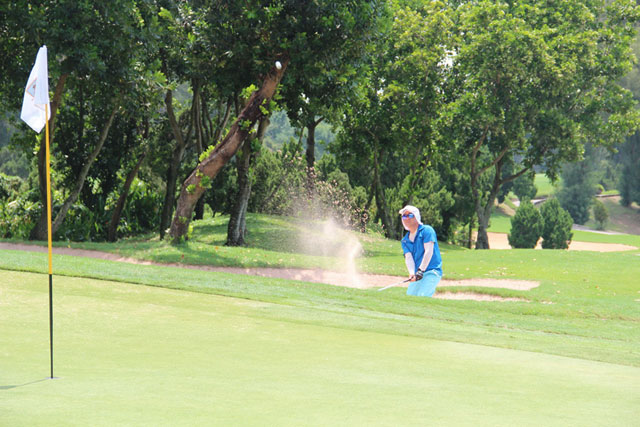 Like Thai Country Club, Alpine Golf Club is a private club that allows limited visitor play. Although up to an hour’s drive from downtown Bangkok on the north-east outer ring road, the trip is more than worthwhile. From the opening hole through to the end of the round, Alpine is a pleasure to play, with large mature trees, bushes and shrubs providing shade and a serene ambience in a parkland environment.

Some regard Alpine, which hosted the 2000 Johnnie Walker Classic won by Tiger Woods, as the most challenging course in the greater Bangkok area. As a point of difference two holes – the 7th and 11th – have island greens, accessed by just small slivers of grass.
www.alpinegolfclub 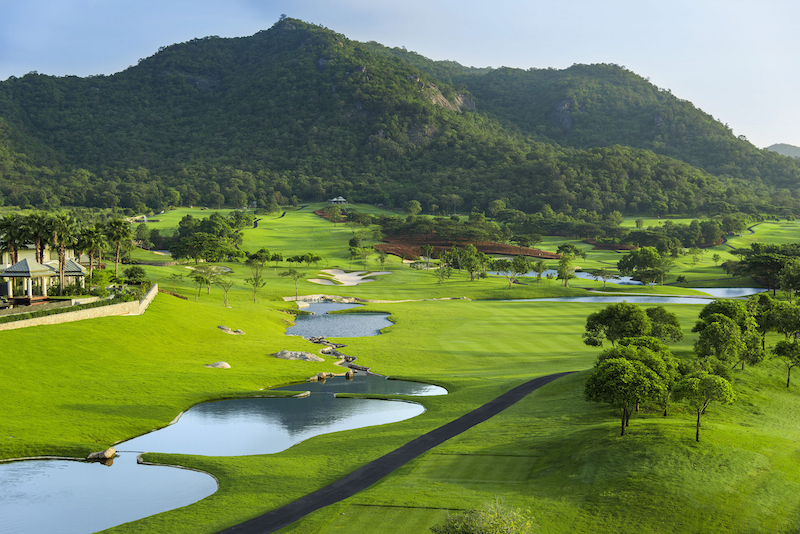 Regarded as the number one course in Thailand and one of the best courses in Asia, Black Mountain has considerably raised the bar for other courses in the Kingdom since it opened eight years ago. Owned by a Swedish entrepreneur and run with typical Scandinavian efficiency, Black Mountain has hosted several Asian Tour events, including the newly created Thailand Classic, held for the first of a three-year arrangement in February.

With villas and condominiums providing on-course accommodation (and ownership opportunities), as well as a spa and tennis facilities, an adjacent water park and wakeboard park, Black Mountain is clearly Thailand’s leading and most comprehensive golf resort. The course itself is majestic, providing pristine playing surfaces and offering wonderful vistas to the black-rock hillsides on the site and further afield to the Burmese Mountains.
www.blackmountainhuahin 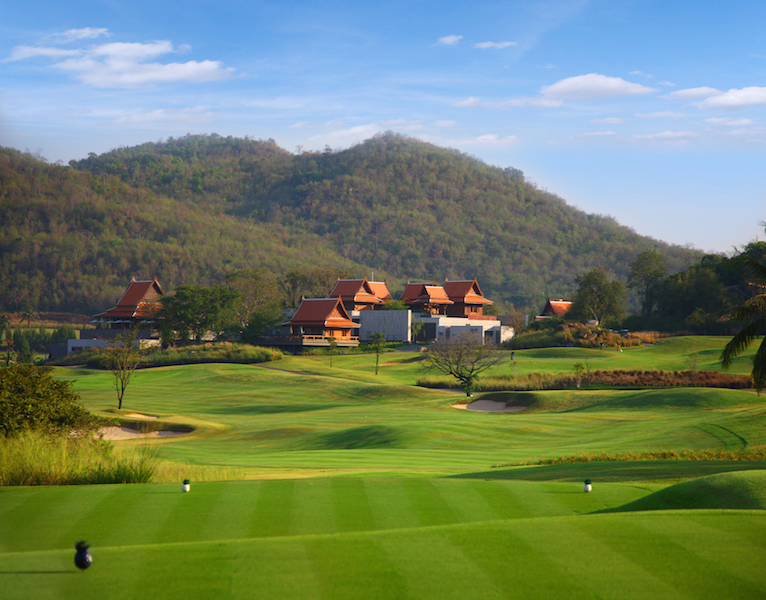 Although it plays second fiddle to Black Mountain, Banyan has its own special charm and appeal. A more rustic experience than immaculately presented Black Mountain, Banyan is just 10 minutes from Hua Hin. It usually plays a few shots harder due to heavy rough along the fairways and numerous side-hill lies. The modern Thai-style clubhouse has one of the best open-air casual after-game relaxation facilities in the Kingdom, with wonderful views over the course and beyond to the mountains.

Managed by former British/Irish hoteliers, food and beverage is a feature, as is the opportunity to meet and mix with visiting golfers from all over the world who enjoy the laid-back atmosphere. 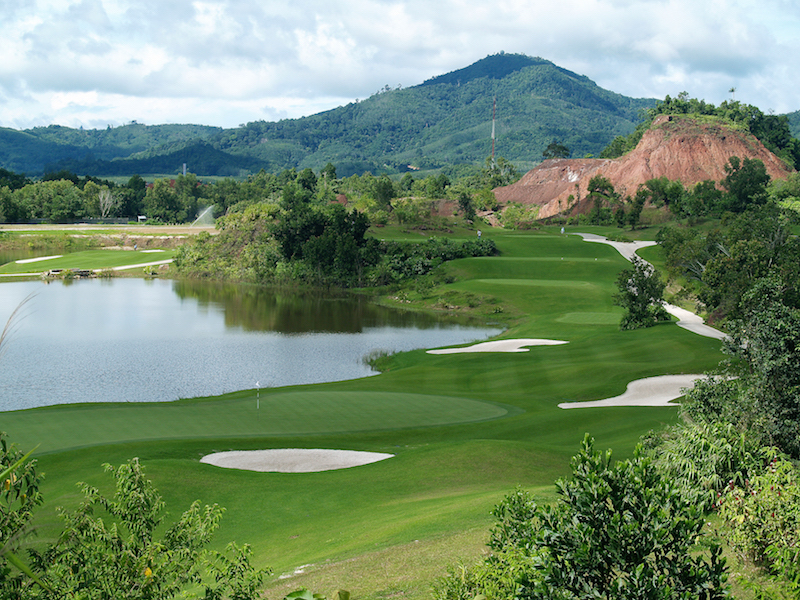 If a spectacular jungle backdrop is your preference for a challenging game of golf, nothing beats Red Mountain. Set on a former tin mine, the course provides a colourful kaleidoscope of green jungle and playing surfaces, exposed red land formations, blue water in many former quarry holes – and the sky.

Although requiring a 30-plus minutes drive from most beachside destinations on Phuket and charging some of the highest green fees in Thailand (up to Baht 7,200 including cart and caddie),Red Mountain is a must-play experience for any serious golfer. Don’t miss it.
www.riverdalegolfclub.com This recently remodelled resort course has leapfrogged competitors to become acknowledged as the best overall golf experience on the resort island. Part of the Banyan Tree-owned complex that includes seven hotels set on and near picturesque Bang Tao beach, Laguna Phuket is an eco-friendly course that features watercourses attracting numerous bird and wildlife species.

It’s also a challenge, despite playing a relatively short 6,600 yards from the back tees. With world-class resort facilities on site, the number of rounds being played on the Paul Jansen redesign has escalated dramatically compared with business on the original layout that opened in 1992. The change from old to new is remarkable.
www.lagunaphuketgolf.com

“Nikanti” is a Sanskrit term that roughly translates into “the step before enlightenment”. As managing director, Warawit (Nick) Sasomsub, aptly explains: “We don’t want our visitors to go beyond nikanti, because if they do they won’t come back.” But such are the reviews of the course, almost everyone who plays seems certain to return. Officially opened late in 2014, the Pirapon Namatra-designed course is the first in the world known to feature a 6-6-6 layout comprising six par-3, six par-4 and six par-5 holes, configured in three six-hole loops. Appropriately, the club’s logo is the number 6, as written in Thai.

Nikanti is also the venue of undoubtedly the most modern and sumptuous clubhouse in Thailand. An all-inclusive rate includes golf, cart and caddie fee, soft drinks and a meal before or after your round.
www.nikantigolfclub.com

The Taste Of New Zealand

This picturesque, waterside course in a rural setting flies under the radar when compared to other Thai courses. Host of the 2011 Thailand Open and two other Asian Tour professional tournaments in 2009 and 2010, Suwan was designed by an army general who demonstrated considerable talent for creating a testing, interesting and attractive golf experience.

Situated close to Nikanti, it’s a pity there isn’t yet quality international standard accommodation nearby as there is plenty of golfing and general interest appeal in and around Nakhon Pathom – the town where Buddhism is said to have been introduced to Thailand in the third century BC, a town that is home to Pra Pathom Chedi, the world’s tallest stupa.

As hotel options in Nakhon Pathom are limited, plan a day trip for the golf. Make it an extension of your stay either in Bangkok or Kanchanaburi. The Old Course, opened in 1970, was the first private golf club in Thailand. In 2005, the 27-hole Plantation course was opened and the Old Course was remodelled. In 2014, a third layout known as Waterside came into play, providing 63 holes of golf at one destination, albeit with three separate clubhouses. More than 100,000 rounds a year are played at Siam Country Club, testament to the quality of the courses and the commitment and attention to detail of the owners, the local Pattaya-based Phornprapha family.
www.siamcountryclub.com

Chiangmai Highlands Golf & Spa Resort
One of the most picturesque courses in the Kingdom, Chiangmai Highlands could have been lifted out of a guide to the most beautiful golf courses on the planet. Set in stunning highland surroundings, this is a golf course to savour. The front nine is relatively flat, contrasting greatly with the back nine that features sweeping uphill and downhill holes.

There is no better finishing hole in Asia than Chiangmai Highlands’ 18th hole, which sweeps downhill from the tee before rising sharply to an elevated green with the clubhouse behind.
www.chiangmaihighlands.com 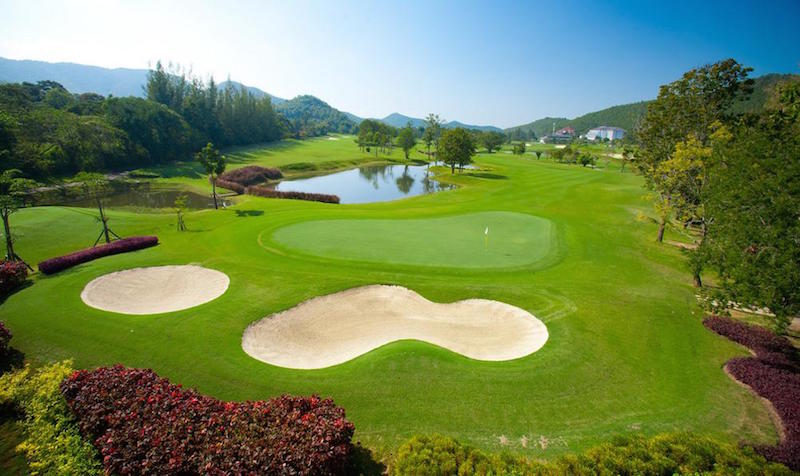 A sister course to the Bangkok club of the same name, Alpine Golf Resort Chiangmai is renowned for its immaculate presentation, natural surroundings and lakeside setting, especially on the back nine. US designer Ron Garl brought the same standards as his Florida jewels, TPC at Prestancia and Palm Beach Polo Club, in developing the layout.

A sheer delight for golfers of all abilities, Alpine Chiangmai plays a long 7541 yards from the black tees, almost as long from the championship tees as Black Mountain. The course will challenge the serious player, although anyone who enjoys golf in fresh country air and being close to nature will find it equally pleasant from whichever tees they choose.
www.alpinegolfresort.com